Working from a recipe posted over at 28Cooks (one of my favorite food blogs, to be sure), I cooked up some Provençal biscotti. The original recipe called for more or less the same ingredients, but included green peppercorns in brine...which I have found absolutely impossible to find in my area. Granted, I did find them online for a good price, but I was unwilling to pay $15 shipping to get them. Thus, I simply struck them from the recipe and substituted a teaspoon or two of herbes de provençe. 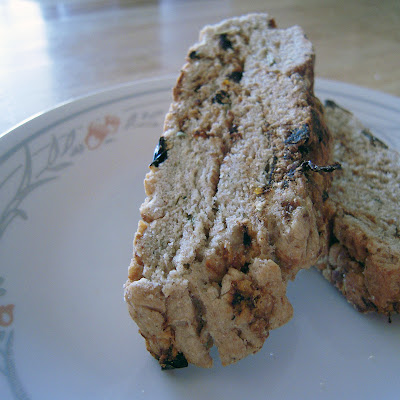 Never having made a savory biscotti before, I was going into this one blind. I've only ever made sweet biscotti, so this was a fun adventure. The texture is softer than I was expecting, but I think I took them out of the oven a bit too soon. A little longer and they might have crispied-up a bit more. The texture and flavor are indeed savory, and more akin to a scone or soda bread than a traditional biscotti, and is delicious served along side a cup of soup or with a salad.

I think this idea of savory biscotti deserved further exploration.

Posted by Tom at 8:26 AM No comments: Links to this post

A bit of an off-beat posting today...

I don't remember exactly where I found this, but it cracks me up every time I watch it. It's a home video of Chef Christopher Walken (who knew?) sharing his recipe for Chicken and Pears.

Posted by Tom at 7:14 PM No comments: Links to this post

Get the word out!